Cost £23*, includes dinner followed by a talk by Lee Spencer (see below). 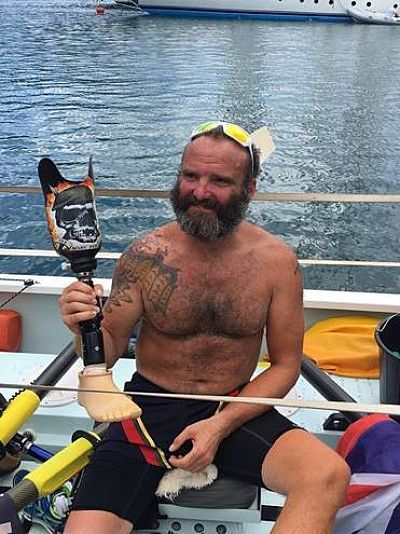 Lee joined the Royal Marine Commandos in 1992. Following operational tours of Northern Ireland and Iraq, he qualified for special duties and undertook 3 tours of Afghanistan, often working in an undercover and covert role.
In 2014, Lee lost his right leg below the knee whilst providing assistance at a road traffic accident. Lee utilised his military training to save his own life by instructing a passer-by to apply a tourniquet. He was awarded the High Chief Constables award for his selfless actions on that night.
In 2015, Lee was one of a crew of four amputees who first rowed across the Atlantic and into the Guinness World Record books.
In January 2019, Lee set off from Portimao, Portugal to row solo and unsupported from mainland Europe to mainland South America. 60 days, 16 hours and 6 minutes later he rowed into Cayenne, French Guiana to become the first physically disabled person to do so. He also smashed the able bodied record by an astonishing 36 days!
As The Rowing Marine, Lee has raised money for The Royal Marines Charity and the Endeavour Fund.
A natural and engaging speaker, Lee’s incredible personal story will captivate and inspire.
* Please note that payment will be required at least one week in advance of the event. Cancellations received within 48 hours of the event cannot be refunded.