From Trafalgar to the Falklands

A History of International Hospital Ships 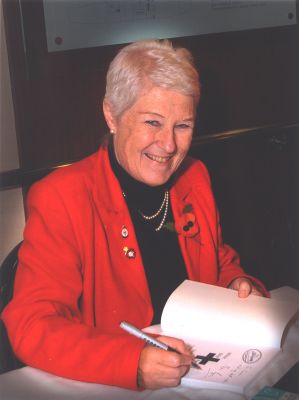 All images on page Copyright © Nicci Pugh
On Thursday, November 17th, T&DMS was delighted to have Nicci Pugh return as guest speaker.
21 months earlier Nicci had kept us totally engrossed by the amazing story of how the Educational Cruise Ship Uganda had been converted to Her Majesty's Hospital Ship Uganda in April 1982, and of the ship's pivotal role in saving the lives of injured personnel involved in the Falklands conflict.
For tonight's talk Nicci told us the story of how ships had evolved from being mere 'hulks' for transporting the injured home, to dedicated ships such as Uganda, which ensured that if a casualty arrived alive, having been helicoptered off the battlefield, then thanks to the skill and dedication of the surgical and nursing team he was most likely to survive.
Going back to the late 1700's, HMS Victory, having been laid up for some time, was used as 'hulk' in a sad barnacle encrusted state. This was before she was restored to her fully operational state as Admiral Nelson's flagship for her successful role in the Battle of Trafalgar.
Casualties were high at the battle of Trafalgar and William Beatty, ship's doctor, as well as tending to Admiral Nelson on the Orlop deck performed 11 amputations, all without anaesthesia.
Amazingly 8 of those men survived the month long sail home.
The evocative painting (shown above) of casualties from the Crimean War being taken off shore from Balaclava for transport home clearly illustrates the forlorn and desperate state of the injured untended men.


Foundation of the
International Red Cross

When visiting the wounded at the Battle of Solferino in 1859, the Swiss businessman and humanitarian, Henri Dunant, was horrified by the huge number of casualties (c40,000) and the lack of any basic facility to treat them.
He was inspired by the urgent need for 2 things – a relief organisation that would provide aid during war, and an agreement that would allow the relief organisation to operate freely during war as a neutral party. 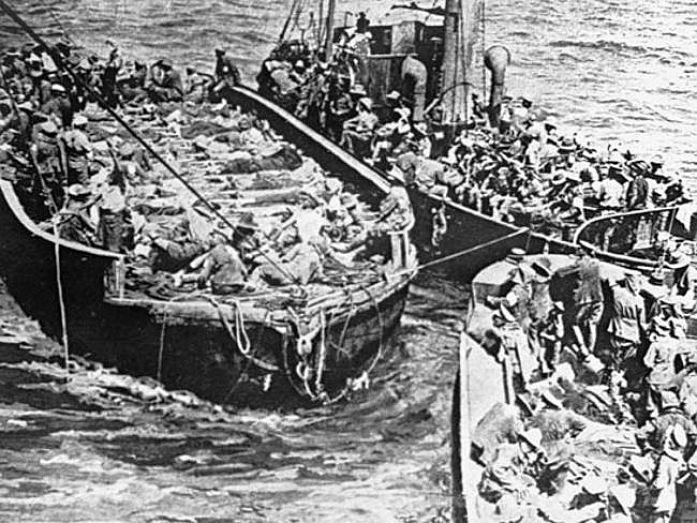 The efforts of Henri Dunant, and his "Committee of Five", led to the first Geneva Convention with sixteen countries signing up in 1864.
Alongside the Geneva Convention, Dunant founded what became the "International Committee of the Red Cross", realising that, especially in times of war, there would be the need for help from volunteers.

The first Hospital Ships that came into being were usually commandeered from organisations like P&O, Cunard and White Star - as well as from many Commonwealth countries.
They were painted white with a green line down the sides of the hull and red crosses on the hull and funnels. This distinct appearance was supposed to protect them from being targeted by enemy vessels.
Despite their unmistakable appearance and non-combative role, sadly, some were attacked and sunk in both World Wars, including HMHS Britannic (pictured above) which was sunk by a mine in 1916.

There were rapid medical and technical advances after WW2, and the invention of the helicopter changed everything from the Korean war onwards.
It was the Americans who led the way, in Korea and Vietnam, with other nations following their example.

Nicci touched briefly on the role of Hospital Ship Uganda in which she had served as Senior Nursing Officer running 1 of the 3 surgical trauma teams of QARRNS as they nursed within the Combat Zone, often in heavy seas during the Falklands conflict.
All they had for protection was their "White Ship; Red Cross" appearance, keeping the lights blazing all night to show the livery.
The UK no longer commandeers ships in times of war and the Royal Navy now has the Falmouth based dedicated British Casualty Evacuation Ship RFA Argus.
RFA Argus is often heard of in the media, such as when she served offshore during the Ebola epidemic in Sierra Leone.
Because of her dual role with the Royal Navy, RFA Argus does not wear the "White Ship; Red Cross" livery of a Hospital Ship but is painted battleship grey.
As well as the state-of-the-art American hospital ships, it was fascinating to see that the Chinese have similar high tech hospital ships which looked equally impressive.
In concluding her talk, Nicci mentioned the Mercy Ships - an international non-governmental charity - whose ship, staffed by volunteers, traverses the world offering free medical and surgical care when needed, and in doing so aids truly huge numbers of people who otherwise would have no care. 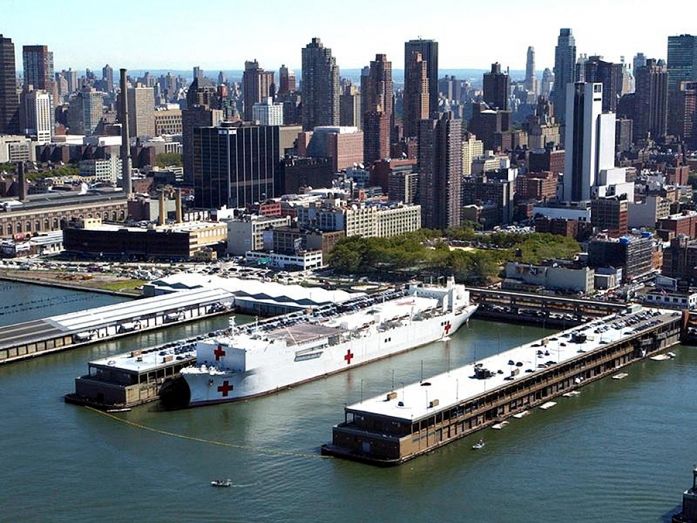 This was a fascinating, fast moving and well illustrated presentation which gripped the audience's attention.
There was time for questions including how the 180 or so Argentinian casualties were managed?
The answer: initially they were sedated post op, then it was possible to separate them from British recovering casualties, and they were flown off to their own hospital ships when fit enough.
There was a Spanish speaking clergyman on board, who helped keep the peace!
Norman Doidge gave the vote of thanks, thanking Nicci not only for her excellent presentation, but also expressing our gratitude for her bravery and that of her colleagues working under such trying and dangerous conditions and handling such horrific injuries.

Nicci's book "White Ship - Red Crosses" is currently being reprinted in its 6th edition. Copies will be available to purchase via Amazon Books in early November.
(ISBN: 978-1-78955-740-4)

Nicci continues to donate any profits from book sales to the tri-service association for veterans of the Falklands War, The South Atlantic Medal Association (SAMA82) Registered UK Charity No: 1118842.

More information about SAMA82 is available on their website at www.sama82.org.uk